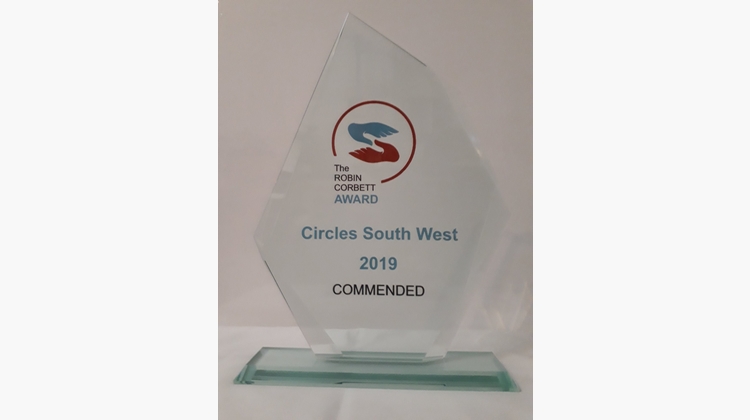 Circles South West has been Commended by the 2019 Robin Corbett Award for Prisoner Re-integration. The commendation is in recognition of its work rehabilitating individuals serving sentences for sexual offences at HMP Leyhill in Gloucestershire, by providing Circles of Support and Accountability during and after release.

The innovative risk management approach compliments and supports the work of public protection agencies, helping to facilitate the safe integration of people into the community.

Recycling Lives, a social business which enables prisoners to gain skills and qualifications to help them lead a law-abiding life on release, has been awarded the first prize for its work at HMP Wymott in Lancashire. A Fairer Chance has been Highly Commended for its work in connecting prisoners with employment tailored to their skills during and after release.

This annual Award, which recognises outstanding rehabilitative work with prisoners by a charity or community group working in partnership with prison staff, was set up in the memory of Lord Corbett, the respected chairman of the Home Affairs Committee. For ten years, up until his death in February 2012, Robin Corbett also chaired the All Party Parliamentary Penal Affairs Group, to which the Prison Reform Trust provides the secretariat.

The Award particularly seeks to recognise work that fosters personal responsibility, and which encourages people in prison, and ex-offenders, to take responsibility to help both themselves and help others.

The Awards, sponsored by the Chrysalis Foundation and the Worshipful Company of Weavers, will be presented by Lady Corbett on 26 February 2019 at a meeting of the All-Party Parliamentary Penal Affairs Group in the Houses of Parliament.

The first prize is £5,000, with the runner-up awarded £3,000 and the commendation £1,000, all courtesy of the sponsorship from the inspirational Chrysalis Programme. Winners also receive glass plaques donated by James Timpson plus a book about the life of Lord Corbett.

“Amongst some outstanding applications, Recycling Lives’ work and exceptional results meant that the judges were unanimous in their decision. A Fairer Chance were also worthy winners of the runner-up prize, and we were very happy to commend Circles South West for its vital work. My husband Robin was resolute in his belief that release from prison should be an opportunity to make positive changes in individual’s lives. All three charities stand as outstanding examples of how organisations can assist prisoners to help themselves.”

“It wonderful to receive a commendation from this prestigious award, and a vindication of the work of our organisation. We hope that the raised profile resulting from the award will impact positively on our future funding enabling us to extend this work both on HMP Leyhill and other prisons in the south west, and the prize money will go towards this end.”

“It is always fantastic to win any award. To receive the Robin Corbett Award is particularly special. It means so much as we are being recognised by experts in the prison field. To go from working with one man on ROTL 10 years ago, to changing hundreds of lives every year is something we are immensely proud of. My team deserve all the credit as they leave no stone unturned to help the people we work with. However, the real winners are those men and women who have turned their lives around. I couldn’t be prouder of them.”

“We feel honoured to be the Highly Commended winner of the Robin Corbett Award, and it is wonderful to have our work connecting women in prison with employers who match their skills and aspiration recognised. The prize money will go directly towards the delivery of a planned programme of cross-sector events and open days in HMP East Sutton Park and other women’s establishments. The profile that comes from the award will enable us to expand our operations and engage with a wider range of private sector employers.”